The Mountain Hawks took to the field at Goodman Stadium on Saturday to play their annual spring football game between offense and defense.

The spring scrum is not played in the traditional way. There is no timer and the attack starts either on the defense’s 30-yard line or on its own 25-yard line. After a touchdown or turnover on downs, the team returns directly to one of these spots.

The quarterback also changes every possession or two, giving every quarterback on the team a chance to play with the offense.

Junior Dante Perri started the scrimmage as quarterback and led the offense into the end zone, rolling and throwing junior Eric Johnson for the touchdown.

“It felt good,” Perri said. “We did exactly what we wanted to do this spring (which allowed us to not make mistakes and not shoot ourselves in the foot. We had a decent spring game and I think we we are ready to take off.

Later in the game, Perri took over the downfield offense and threw a second touchdown to senior running back Zaythan Hill, but it was called off due to a false start.

Hill left a mark on the box score, however, with a 50-yard run to set up senior quarterback Nigel Summerville’s passing touchdown to junior tight end Christian Williams.

“There were times when we played together and put together everything we were working on, but we definitely have things to clean up in anticipation of the fall season,” Murphy said.

The defense shone throughout the game, prompting multiple possessions three times from the offense, including a sack to end an early possession by elder Mikhari Sibblis.

Coach Tom Gilmore said he liked the intensity throughout the game. 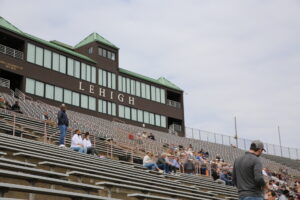 Fans at the Lehigh Brown and White Spring football game on Saturday April 23, 2022. The Mountain Hawks wrap up their annual spring season with the scrimmage, pitting offense against defense.

After senior tight end Ian O’Connor was injured due to a tough tackle from junior Liam McIntyre, both teams cleared their sidelines.

The attack were unhappy with the way the tackle came, which led to the skirmish.

Perri was right in the middle of the disagreement.

“We’re a hugely competitive group, which overall is a good thing, and at times like this it can get a bit hectic,” Perri said. “Liam, love him to the death, but sometimes things boil over. Me and him walked in there a few times during camp, then kissed at the end and said we love each other. That’s how the whole team works, and that’s a great thing.

Gilmore said he had seen very good things on both sides of the pitch and was optimistic about the team’s position.

Next fall, the Mountain Hawks will face Villanova on September 2 on the road, before returning to Goodman Stadium for their home opener on September 17 against Richmond.